There's probably not going to be anything to see - unless I've figured out Flickr, that is.

As an img tag: 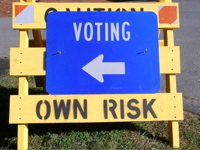 As the Flickr-provided HTML snippet:

Well, democracy is dangerous either way.