Back in August, I spent a fun day playing seaport tourist, including a tour of the replica HMS Bounty as she was making a port call in Bridgeport, Connecticut.

Today, she sank off Cape Hatteras, courtesy of Hurricane Sandy:

PORTSMOUTH, Va. (AP) — The Coast Guard rescued 14 members of a crew forced to abandon the tall ship HMS Bounty caught in Hurricane Sandy off the North Carolina Outer Banks and continued the search Monday for two other crew members.

"They were staying in constant contact with the National Hurricane Center," she said. "They were trying to make it around the storm."

Coast Guard Vice Adm. Robert Parker, Operational Commander for the Atlantic Area, told ABC’s "Good Morning America" that at the time of the distress call the ship was taking on two feet of water an hour.

He said the crew abandoned ship into canopied, rubber life rafts with about 10 feet of water on board.

I presume that the two life rafts mentioned by VADM Parker are the ones in this picture: 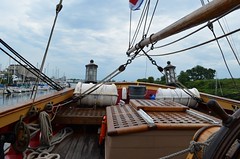 The sea can be unforgiving.

Originally posted at http://edschweppe.dreamwidth.org/153846.html - comment wherever you please.
Collapse