It's been a week (and a bit) since my knee surgery. A milestone, rather than a millstone.

The good news:
No complications from the surgery that I can detect. The post-anesthesia fog cleared up in about a day (as expected).
No excess bruising or swelling.
No sign of infection, leaking sutures, etc.
Not much pain anymore; I don't need the high-power narcotic pain medications anymore, and can usually get through the day without needing even OTC pain medications.

The bad news:
My mobility sucks and will continue to do so for the foreseeable future. I need to have my knee brace locked at full extension (leg completely straight) whenever I walk anywhere. Even with the brace, I'm very leery of trying to walk any significant distance. My new Current Paying Gig is in downtown Boston, at least a quarter-mile from the nearest transit stop; this means that I actually have to drive into Boston at rush hour and pay downtown parking rates to get to work.
Climbing up stairs is a very slow process; climbing down stairs is worse. Climbing down stairs with any sort of cargo? Very difficult; I have come to quite the appreciation of the concept of the dumbwaiter. (And I'm really not looking forward to any building evacuation drills that might occur in the next few months.)
Getting into and out of the driver's seat is literally a pain in the ass. My knee does not like bending, even as far as the brace will let me bend it; to get in the door, I have to slide myself into the car sideways and sit on the center console before I can get my left leg far enough into the car to fit under the wheel. Hopefully that'll ease over time, but right now, I'm not only using handicapped spaces, I'm using handicapped spaces with the extra striping by the driver's side door.
Physical therapy has yet to begin, but I can already tell that my left quad is a lot weaker than it used to be (having effectively done nothing for the last month). This will be my first time ever having to do PT, and I'm not looking forward to it. (I'm looking forward to it being done, but that's not the same thing.)


Bonus before and after pics: 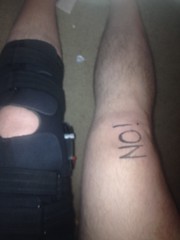 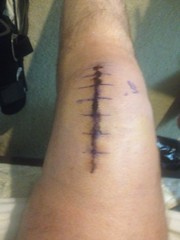 Six months is going to seem like a long time to recover.