Plenty of cold today. No snow, mind; apart from a few remnant plow-berms, the only snow to be seen is the artificial stuff at Nashoba Valley. Ground this bare in February just ain't right.

I drove up to Portsmouth (NH) this afternoon to see the partially-dismantled Memorial Bridge, which I'm used to seeing from below as the boats head out to Star Island. The bridge hadn't been given anywhere near enough maintenance - the amount of rust on that thing was frightening - and the states of New Hampshire and Maine have finally given up and agreed to replace it. Last week, the lift span was cut away and placed on a barge, which is currently tied up at Prescott Park: 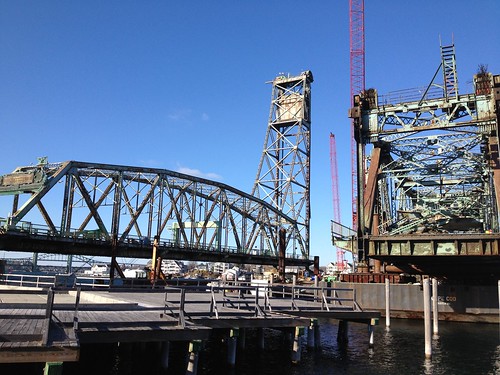 In related news, the Star Island "blue book" (conference catalog) arrived the other day, so it's time to sign up for this year.